The bad, the worse and the beautiful

This has not been a good week.  Until life calms down a bit I will continue flying into the blogosphere, depositing a post and flying out again.  I am hoping that soon I will have the time and spare brain cells to enable me to read and comment on other people's posts.

The Smaller Portion is still in hospital.  His bowels are still partially (almost completely) blocked.  Today he had a colonoscopy - a last ditch attempt to avoid going back into major surgery.  It failed.

He was told nothing after he was returned to the ward except that from midnight he was on 'nil by mouth'.   The nursing staff knew, or professed to know nothing.  Sadly, fasting spells imminent surgery to us.  (Since the 19th of June when he had his last surgery the Smaller Portion has been on an unrestricted diet for only three and a half days).

While I was visiting him a baby doctor appeared (I use the term baby doctor to describe one with limited experience and/or authority.  In this instance he had nothing to do with maternity care)  He confirmed that the colonoscopy had not been able to clear the blockage.  He went on to say that this meant that something would have to be done.  And from that point he descended into mealy mouthed platitudes.  Perhaps a colostomy would be needed.  Or then again it could be an ileostomy. Almost certainly a bag would be necessary, or maybe it wouldn't be.  It might be needed permanently- or maybe not.  Perhaps they would remove the narrowed segment of bowel and do a resection.  Or maybe not.  The surgical team would need to meet and discuss the options.  Which left us in limbo - not a nice place to be

The Smaller Portion and I know that he would need to sign a consent form before they could do anything - and that he needed much more information.  The fasting from midnight suggested to us that they wanted to get him to theatre early tomorrow.  If they are able to tell him what they plan to do he will sign the consent form and ring me.  Joy and bliss.

It has certainly been a stressful week, but there have also been magical moments of beauty which I treasured.  Early in the week I thought I had lost my wallet.  I went tearing outside just after dawn to check the car, and was greeted by this (and the wallet was indeed on the floor of the car). 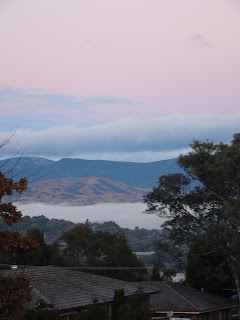 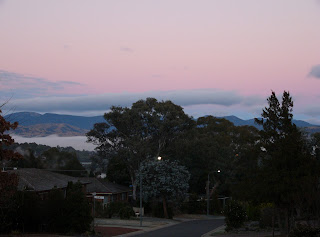 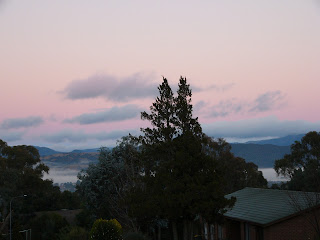 The cockatoos at the hospital continue to add pleasure to our afternoon visits - they are elsewhere in the mornings. 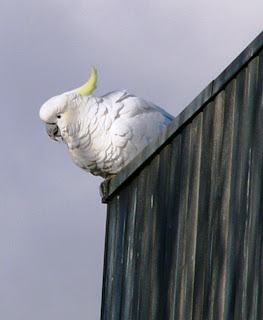 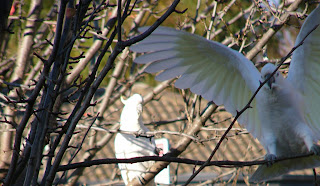 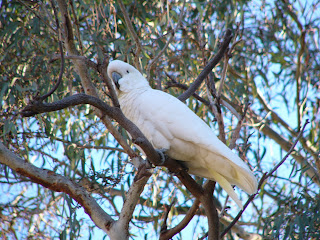 And this week another bird has brightened our days.  We have been seeing one or two Red-Rumped Parrots, so I have taken to bringing my camera up to the hospital.  Today, when we badly needed the cheer, a small flock of them were in the tree outside the hospital entry.  Not only were they there, they were co-operative as well. 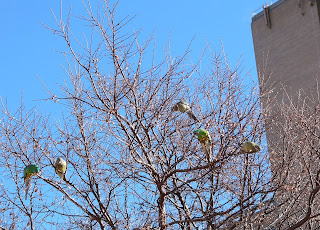 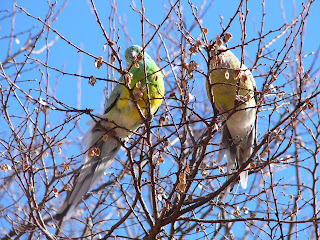 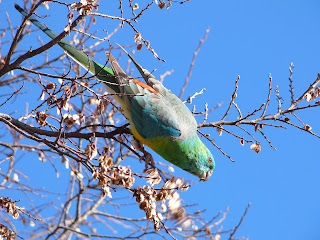 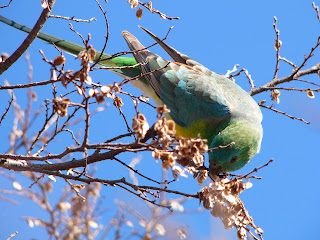 And I almost forgot.  Tonight's sunset was pretty special as well. 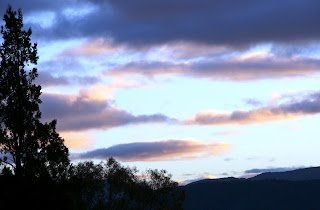 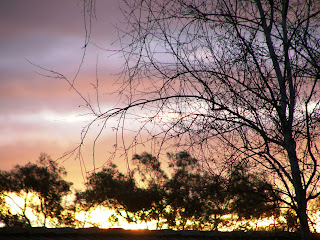 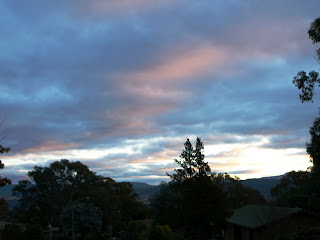