Sadly, those of us who can hear and say them without cringing are privileged.
Too many people are NOT safe at home.  Not safe physically, emotionally, or mentally.

The pandemic crosses borders quickly and insidiously.  But so does family violence.

I knew that and my heart ached.  A few days ago I got a reminder.

Cindi sent me an email asking if she could put up a guest post on my blog.  Not only does she not feel safe at home, her blog is also not a safe place for her.

And of course I agreed.

Here is Cindi's story.  Sadly a story which is told across the world.

It has been a bit of a minute since I last posted on my blog [here], and I have no real explanation except that the things around me right now have been "off," and I've felt a bit numb and overwhelmed.  Exhausted from the yo-yo life ... thrown out and yanked in ... married to a manipulative, narcissistic alcoholic drug addict.


I find myself, two years shy of 60, and 10 years into a life I never thought I would see again.  Six years after leaving everything familiar to start fresh in a place where there wasn't any history, or my husband's family and friends who would ply his mind with meth and cocaine.


I've found myself wondering, especially in light of recent "shelter-in-place" lockdowns ... how many other women found that their home was less of a shelter, and more of a house of horrors?  How many other women have been standing in the shadows, afraid to speak up or speak out, because they felt they had nowhere to go.  No one to turn to that they could trust.  Where do you go when the only "safe" place is supposed to be home?  Who do you reach out to when you must stay six feet apart?


Some of you know that I recently separated ... let me rephrase ... my husband moved out after nearly eight months of turmoil in the house.  His drinking and disappearances became more frequent and his anger more explosive.  My own anger and unhappiness reached volcanic proportions and I said things that can never be forgiven.  Not that I want them to be anymore, and not that I'm apologizing for them either.  Especially after he spent an outrageous amount of money for online pornography, beer and liquor. 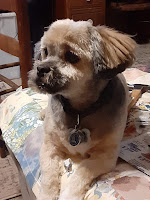 I thought that his absence would bring me some inner calm without there being constant drama and tip-toeing about, but that has not been the case.  His threats intensified.  He took Charlie


[my dog] overnight and subjected him to who knows what.  When Charlie was finally returned [after I said I would arrive with the police to get him if he was not], he was quiet, withdrawn, and exhausted for more than 36 hours.  I had to file a restraining order.  Call the police more than once, and the last straw came on Thursday when he tore open a screened window to come into the house while I was working to scare and intimidate me.   Scare me, he did.  Intimidate me, he did not.  As of this moment, at 10p on a beautiful Saturday evening, I still don't know if he has been served the restraining order papers that were filed on Wednesday morning.


His most recent attempt to bully and intimidate me has come with threats to shut off all of the utilities to the house because they are in his name, knowing that I work from home and a sudden disconnect of internet or electric would be damaging to me financially due to lost hours and wages.  (but you see, I am so much smarter than he.  In the last 24 hours I have had all of them put in my name so that he [pun intended] has no power over me.)


Originally, I wanted to be able to stay as long as possible in this house that I once thought would be the last house I ever lived in.  I've lived in more houses than half of my years on this earth.  I wanted a place to finally call home.  Perhaps even forcing him to concede defeat and let me keep it.   Watching with anticipation for every spring bloom, every new bird at the feeder.  But then I realized that those I thought were my "friends" are actually my enemies, and my inner circle became so small it consisted only of me and the fur-kids.   Even if I had been able to stay here in this house for the rest of my life, I would never feel safe here again.  Never feel connected to this town that once gave me such hope.


Plan B became to leave Wisconsin and move to Virginia where I would be closer to my mother in North Carolina, a sister and her family in Virginia, a brother and his family in Georgia, and another heart-sister and her family in Pennsylvania.  But I also need to make sure before I leave that the divorce has been started so that I don't have to come back or wait to meet a residency requirement in another state.  Reserving and renting a trailer to move the furniture I wanted to take to restart my life.  Finding somewhere to live before I got there.  Not as easy as it sounds with two cats and a dog, none of whom I will leave behind.  The list continued to grow, as did my stress, in opposite proportions to the amount of sleep I've been getting lately [just three hours last night].


Today I have been wandering from room to room during my breaks from work and doing a mental inventory.  I've come to realize that the process of leaving doesn't need to be as stressful as it is.


I measured the back of my truck and realized that it would hold six storage containers without needing to stack any of them above the window height.  Six tubs to hold everything I need to start my life again.  Furniture I can get again, most of mine are upcycled or yard sale finds.  There is a storage unit filled with things I've occasionally thought about, but have really not even looked at in three years.  My clothes are all from the Goodwill, and if I move to a little bit warmer climate, won't need six months of winter wear.


If there is one thing I am looking forward to replacing ... it is the person I became, with the person I will become.  Someone new, for the last four decades of my life.  Someone hopeful, happy, and creative (yes, there will be another book written from this.  It is far too satisfying to write out the karma destiny for an ex to NOT give David his 15 seconds of fame.)


At the beginning of this year, I chose a word to represent what I wanted this year.


I wanted to thrive.

And how I hope you can thrive Cindi.  Survive and thrive.  In safety.