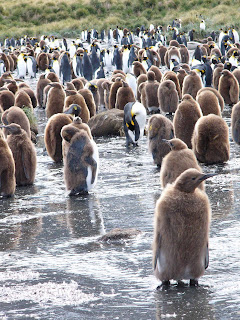 Not a scientific post, not a medical post, just musing on what having MS has meant for me personally.  Not least of which is to be grateful for a black sense of humour.

I was diagnosed during MS awareness week eighteen or nineteen years ago.  With the benefit of the twenty twenty vision that hindsight bestows I had MS for a good ten years before the diagnosis.   My overwhelming feeling when I was told was one of relief.  There was something wrong, I wasn't a hypochondriac and I could start to tackle it.  And, if you have to acquire an incurable disease there are many worse ones about.

I was working in disability policy at the time (oh the irony of it) and after some time off returned to work.  My then manager took to speaking slowly and loudly to me and using little words.  I asked her to stop.  She didn't.  So, in an interdepartmental meeting when she did it again, I dropped my jaw and dribbled at her 'whats that u say, I dindna unnerstand'.  She was mortified.  I should perhaps be ashamed but am not.  And while I don't think it did my career any good I think she learnt something (though perhaps it was just not to push me too far).

Over the next few years a pattern developed.  I would have a relapse and take a few weeks off.  I would go back to work and get more and more tired.  Tired to the point of nausea. Tired to the point where as soon as I got home from work I went to bed.  Where I spent most of every weekend.   So, I started working part-time.  And too soon for my liking discovered that really wasn't practical either.  So, I was invalided out of the paid work force.

And discovered that for me at any rate, at a lot of my identity was based around what I did.  So I became a voluntary telephone counsellor with Lifeline.  Which has been magical.  Some shifts are gruelling.  Some calls have made me weep for and with the callers.  Some have terrified me.  Some callers have made me smile until my face hurts. And the sexual fantasy callers (Lifeline is cheaper than the sex lines) piss me off big time.  But whatever is going down in my life at the time I have never completed a shift without feeling grateful for the life I lead and the people I love.  And now I am a supervisor for other telephone counsellors too.  The organisation asks a lot.  Ongoing compulsory training and supervision.  Regular shifts.  Professionalism.  Acceptance of difference.  And I am not yet even contemplating giving it up.  And since the end of last year I provide peer support over the  phone to other people with the dread disease.


Physically MS can be hard.  I move less freely. I drag a leg a bit.   I am as flexible as a brick.  I have, as I whinged on an earlier post, got stuck on the toilet.  There is significant pain.  Teemed incongruously with reduced sensitivity.  My epidermis is much less sensitive and, as a result, having treatment at the hospital late last year I was burnt (and blistered) when I didn't realise that the warm damp cloth the staff had applied to bring up a vein was in fact hot and wet.  I knew I had reduced sensitivity in my feet and legs but hadn't realised it extended to my hands and arms.  The pain is deep pain and can wake me (and the smaller portion) shrieking.  It doesn't disturb Jazz the psycho cat.  My hands shake and my fine motor control is shot. My handwriting is less legible.   I am dangerous with kitchen knives.  Sometimes I lose (fortunately so far temporarily) my vision.  All these things are irritating, but so far manageable.  I once wanted a pumpkin curry and had no-one available to cut it up for me.  So I threw it onto the back deck where it shattered quite satisfactorily.  And I like that curry anyway but it tasted particularly good that night.

Heat is an issue.  On hot or humid days my symptoms are exacerbated.  At the worst I fall over.  On the plus side apart from a trip to Antarctica five years ago I haven't needed a coat at all.  And that is a significant plus in Canberra where it can get chilly.  I can go out and collect the papers in my bare feel quite happily.  On the negative side I would love to go to glass making classes.  However the temperature issues teemed with my shaky hands means that option is out.  Sigh.  But not a huge price to pay.

Fatigue is also a big problem.  Not relieved by having a nap/going to bed early.  And I often don't get any warning.  I can be going along quite happily and then, whammo, I am stuffed.  So I have to stop before I am tired or pay the price.  Which I often do find myself doing.  So now I use the pain/gain equation.  When I want to do something which I know will exhaust me I weigh up whether the pain is worth the gain.  And I think all of us have to play that game to some extent anyway.

My memory is shot.  So I write lists, ensuring that at least one thing on the list is easy so I can cross it off.  And it means I can reread books.  In murder mysteries I may not remember who died, much less who killed them.  I lose words - cannot get them out of my mouth.  So I have to resort to mime.  Difficult on the phone.


There is plenty of scientific research underway into finding a cure.  Fingers crossed.  However I have real reservations - most of what I have seen so far concentrates on treating the symptoms which are highly variable).  And I believe finding a cause is integral to finding a cure.
Posted by Elephant's Child at 16:11