Kim at My Inner Chick recently asked for a post about the cats after she spotted them lurking at the bottom of the page.

It probably should be Jewel n Jazz since she joined us first but he has the more dominant personality poisonality by far.  Both cats are rescue cats and we were assessed interrogated before we were allowed to offer them a home.  Jewel had already been returned once because she was too vocal.  When we learnt that her previous owners lived in a flat and went to work leaving her shut in all day we were not at all surprised she complained.  A lot. 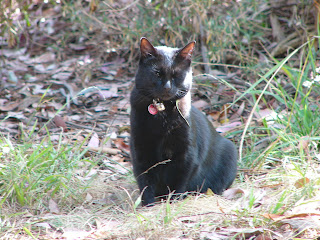 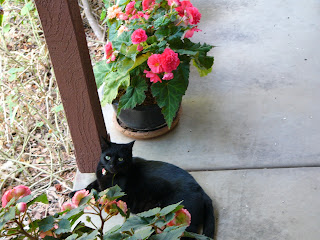 Jazz had been living down by the Queanbeyan River when he was captured and has an independent nature.  I have been known to complain that he is psychotic.  He certainly thinks I am lower in the pack hierarchy than he is.  Marginally above Jewel, but considerably below him.  Occasionally he challenges my Smaller Portion for the position of Top Cat, but mostly accepts the position of second in charge.  Each day he draws blood from somewhere on my person.  His preferred trick is to stretch up from the ground and hook his feet into my butt.  Then he lifts his hind legs off the ground.  He wakes me by reaching under the bed clothes and slashing.  He does neither of these things to the Smaller Portion.  Every so often he starts to 'sing' and launches himself at me.  He is not satisfied until he has bitten and scratched me, drawing blood.  Honour satisfied he wanders off purring.  Again this is something he never does to the Smaller Portion.  I have tried squirting him with water.  He gets very wet but it doesn't alter the outcome.  He will continue until I bleed.  If I leave the room he will wait until I return.  It is lucky that I have reduced sensation, and that I heal well.  It is also fortunate that he is often an exceedingly loving and cute cat. 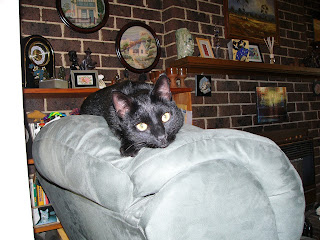 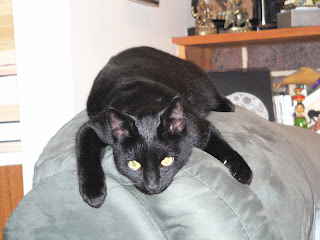 They retained the names they came to us with, with a small exception.  Jazz was Jazzpurr because he purrs so often.  This made me feel unwell.  He is now Jazz and continues to purr loud and long.

They have very different natures and I worried that they would be unable to get along.  The first few weeks were fraught.  Jazz hid under furniture and peed himself every time he heard Jewel's bells.  Then he realised he was bigger.

Now they get on remarkably well.  They have their moments though.  Jazz will leap upon Jewel and flatten her.  She immediately swivels round, takes his ear in her mouth and bites down while shrieking 'he is hurting me' so someone will rescue her.  It works.

They teach each other things.  Jazz taught himself to open the fridge by inserting a powerful paw into the door jamb and pulling.  Jewel is not as strong.  She watched him for a bit and is now able to snout the fridge open.  We now have a child proof latch on the refrigerator to keep the cats out.

Jewel's favourite toy is an acorn shell.  We found her in the kitchen one morning having a wonderful time batting it around and picking it up in her mouth to move it to better locations.  To get that first acorn she had to cross the road, pick it up in her mouth, cross the road again, jump a wall to reach the back yard and bring it in through the back door.  All with it in her mouth.  These days we collect them for her.  Jazz also likes the acorn game, but unsurprisingly, plays rough.  When he bites down, the acorn has to be replaced.  If they bat them out of reach they will come and complain until we retrieve or replace it. 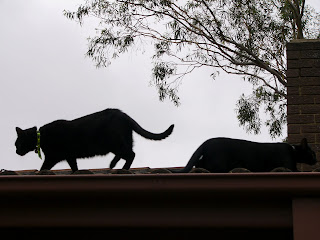 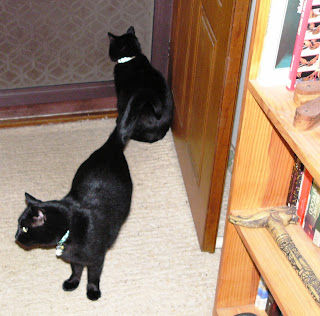 We recently bought some new computer chairs.  The Smaller Portion's is slightly softer.  Guess which one the cats have claimed.  If Jewel gets there first, Jazz will climb up with her.  He will then start to stretch and flex.  If she doesn't get the hint he will bite her. 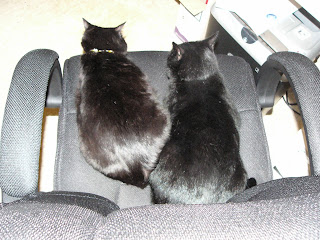 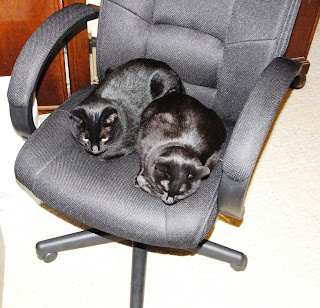 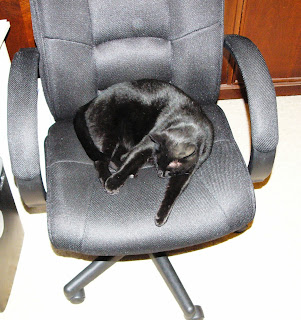 Are their lives better for coming to live with us?  Almost certainly.
Can we imagine life without either of them?  An emphatic no.