I think for the next little while I will be largely absent from the blogosphere.  I also know that I will miss you all.  Blogging has been a safety valve for me, and is surprisingly addictive.

If the hospital does not reschedule again the Smaller Portion will have his colostomy reversed next Tuesday.  Hopefully.  His surgeon has flagged again that an ileostomy might be necessary as an interim measure.  I hope not.  I really hope not.  Not least because the Smaller Portion has assumed that it wont be.

We are told that it is a significant operation and will require an incision bigger than the first.  Regardless of the outcome, when he gets home he will be unable to drive and unable to lift anything which weighs more than one kilogram (which includes the cats).  These restrictions will be in place for about six weeks.  Fun times.

His sister said that she would like to come down.  I said that she would be of most help to us when he gets out of hospital - he does convalescence really, really badly.  So this afternoon the Smaller Portion told me that she will be arriving on Sunday, on a one-way ticket.

She is house proud.  The ambience of this house is cluttered and dusty.  We have been using the spare room as a depository for things which we don't have a home for.  Aaaaargh.  And Jazz, toad of a cat that he is, has taken to inappropriate piddling.  Cluttered, dusty and ponging of cat piss.  Joy and bliss.

I have Lifeline on Thursday (and am not prepared to give it up).  The Smaller Portion wants things to be pleasant for his sister, and does not want her to work while she is down here - 'She is coming down as a favour'.  So I have three days to work miracles.  Including shampooing the carpet.  When the three of us are in residence there will be three different diets to cater for.  More joy and bliss. 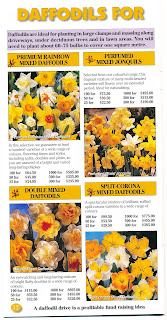 Then the Smaller Portion got in on the act.   And ordered about another 400 bulbs - a lovely selection of tulips and iris and hyacinths.  The daffodils have arrived.  And need to go in the garden soon. Very soon for the ones that are sprouting.   The tulips and other bulbs should arrive next week.  I am still have signficant pain, difficulties in bending, and cannot get to the ground and back up again.  Woe, woe and thrice woe.  Sometimes I think I am loopy.  Other days I know it.
Posted by Elephant's Child at 20:39