The meme is now continued by River at Drifting through life.  This is the one hundredth edition of Sunday Selections - which is quite amazing.  I have contacted Kim, and she has said that she would try and join us again today  I do hope so as her photos are always a quirky delight.

Like River I generally run with a theme. Earlier this week we were interrupted in our mid morning cuppa by a very, very noisy bird.  It was a baby Currawong, a bird I am fond of despite its (at least partially deserved) bad reputation.

It was sitting in the tree outside our living room window begging.  And begging.  And begging.  Its long suffering parent was giving it bits of apple.  Each bite was swallowed quickly, and the begging began again.  I am sorry that the bird's beak is partly covered in the final photo but I included it because it showed the wooliness of baby feathers.  (As always, clicking on the photos will enlarge them). 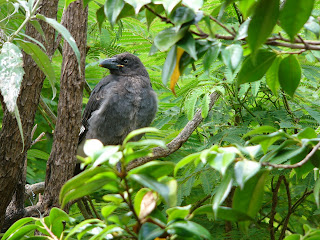 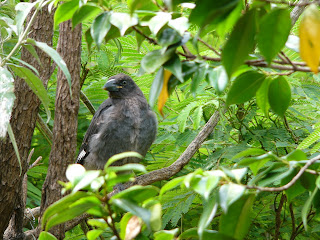 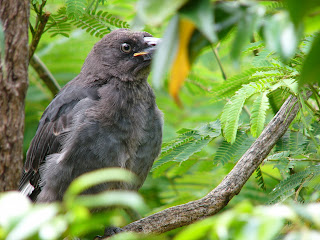 It is a remarkably unmusical bird at this stage.  And ungrateful too - its long suffering parent had given it (another) piece of apple and gone back down to get another when it flew away.


And, because it is after all very almost Christmas....