I am an unashamed bookaholic. After I described myself that way on an earlier post Snowbrush told me that in fact I am a bibliophile.  Perhaps.  But bookaholic is an accurate description of my obsessive need for books.

If I am pretending to be couth and sophisticated I might talk about eclectic or omnivorous reading tastes.  Greedy is more truthful.

I read fiction and non fiction and from a wide range of genres.  There are ones I prefer, but few I won't attempt.  I read every day and frequently neglect other things to do so.

These are some of the very different books which I have devoured recently.  By coincidence only one of the ones I am featuring today is fiction. 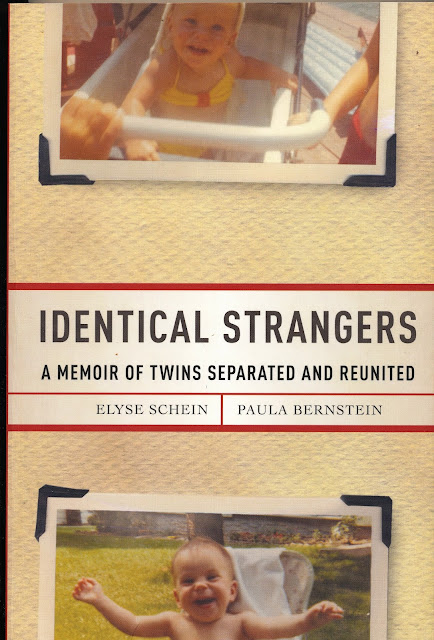 Identical Strangers was a book I picked up at a closing down sale.  Like many 'singletons' I am fascinated by twins, and over the years have read quite a lot about them.

This one filled me with rage.  Elyse Schein had always known she was adopted.  In her mid-thirties she set about searching for her biological mother and opened a very big can of worms.  She discovered that she had a twin.  An identical twin.

They, and far too many others including some triplets, had been separated at birth as part of a secret study conducted by influential psychiatrists into the 'nature/nuture' conundrum, and because of a theory that 'twinship' imposes a burden on both the children and their families.  And the adoptive parents hadn't been told either.   As an aside, despite being reared apart and by very different families Elyse and her twin were remarkably similar.

Given that twins have been seen in sonogram images kissing, punching, embracing it is clear that their connection begins before their birth.  Mengele did some monstrous studies of twins in Nazi concentration camps during World War 2.  However, this study took place in the US as recently as the 1970s.  Hiss and spit. 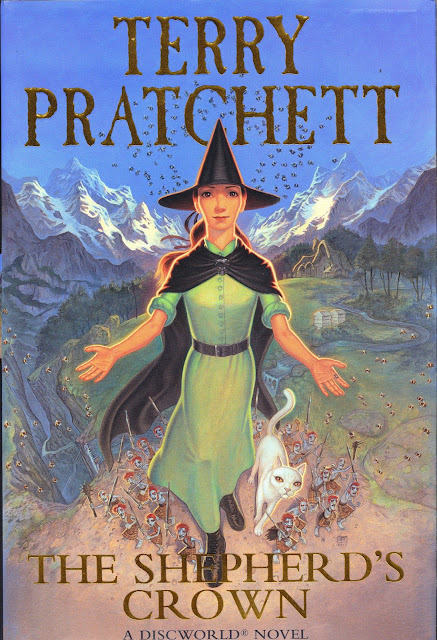 The Shepherd's Crown is the very last book written by (Sir) Terry Pratchett.  When he died in March of this year I, like many other people grieved.  And was grateful that he was finally free of the 'embuggerance' of Alzheimer's disease.  It is the final novel in the 'Tiffany Aching' series of Discworld novels.  A series supposedly designed for younger readers, but enjoyed by people of all ages, me included.  This last novel is perhaps not as polished as it would have become had he lived longer - but still a must read.  And it somehow seems appropriate to me that Sir Terry and Granny Weatherwax died together.


The last two are books written by talented people I found here in the blogosphere, the first by Robyn Alana Engel and the second by Mark Koopmans.  Both of these authors were generous enough to send me a copy of their work.

So many authors lurk in the blogosphere, and tempt, educate and delight me.  I have other works by bloggers in my unread towers too.  And will get to them. 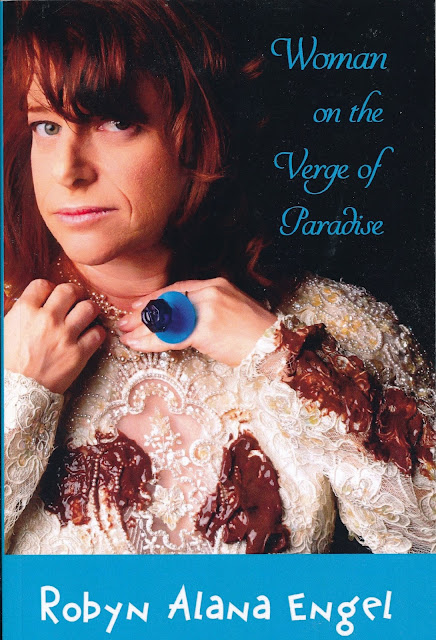 Robyn says that she doesn't like memoirs.  I love them.  She has written something which I would describe as a memoir and she would describe as memoirish.  I do seem to have developed a habit of arguing with authors.

Like many of us she was fed the fairy story that somewhere there is a Prince Charming.  A Prince Charming who would find her, sweep her off her feet, and marry her.  And they would live happily ever after.  Not a happening thing.

I read it with laughter, tears, and a recognition that I am not/we are not alone in feeling robbed by those fairy stories we were repeatedly fed.  It is definitely funny, equally sad (in a bitter sweet way) and very, very real.

And the cover photo?  That is Robyn.  In her wedding dress.  Which is covered in the chocolate which has been sweeter, more nourishing, more reliable and consistent than the men in her life.  So far. 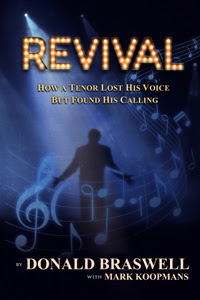 I am going to approach this a little differently and tell you all the reasons I *shouldn't* have liked Revival.  And note I say shouldn't not didn't.

I am not musical.  Music is not an essential to me as it is to so many others.  I watch very little television, and reality shows are low on the list of programs I do watch.  I am at least an agnostic and more probably an atheist.

Revival tells the story of Donald Braswell.  He graduated from Julliard and the 'Texas Tenor' looked set to have a spectacular career as a singer - he had been compared to Pavarotti.  A run-in with a hit and run driver left him lying in a ditch.  Most of his injuries healed relatively quickly.  However, his voice was gone.  And with it the future he expected and planned.  Understandably he gave in to depression and despair.

After the birth of his first child Braswell turned his life around - with a lot of help from his amazing wife, friends, co-workers - and his faith. He worked in jobs well outside his training and his comfort zone.  Perhaps the most dramatic part of the memoir was learning that Donald's wife nominated him to appear on America's Got Talent.  And appear he did.  And you will have to read the book to find out how he did.

So you see why I say I shouldn't have been tempted by, or enjoyed this work?  Fortunately I don't follow rules well.  Mark featured excerpts from the book (then a work in progress) in this year's A to Z challenge.  I read every post and wanted more.

I am so glad that he was intrigued by the story and persistent enough to badger Donald Braswell to let him tell it.  So much of Donald's story is alien to me, but I was fascinated by it.  I marvelled, I wept, I smiled and closed it reluctantly.