I am an unashamed bookaholic. After I described myself that way on an earlier post Snowbrush told me that in fact I am a bibliophile.  Perhaps.  But bookaholic is an accurate description of my obsessive need for books.

If I am pretending to be couth and sophisticated I might talk about eclectic or omnivorous reading tastes.  Greedy is more truthful.

I read fiction, poetry and non fiction and from a wide range of genres.  I read literature and lighter fiction (agreeable trash?).  There are ones I prefer, but few I won't attempt.  I read every day and frequently neglect other things to do so.

I cannot remember not being a member of the local library but also have many, many books of my own.  I do cull and recycle books (not often enough) but acquire more very quickly.  With the exception of the bathrooms and the toilet there is at least one bookcase in every room.  All of them are full, and several are stacked two and three deep.

These are some of the very different books which I have devoured recently. 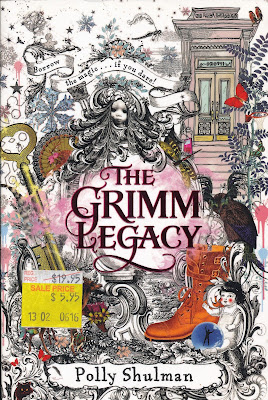 This was a gem and having read it I went back and got the next in the series very quickly.

Elizabeth has a new after school job in a library.  She rapidly learns it is a library like no other.  A library where powerful and mysterious items are available for loan (think cloak of invisibility and seven league boots).  When some of these precious objects start to disappear of course she has to investigate...

And how I wish I had access to that library. 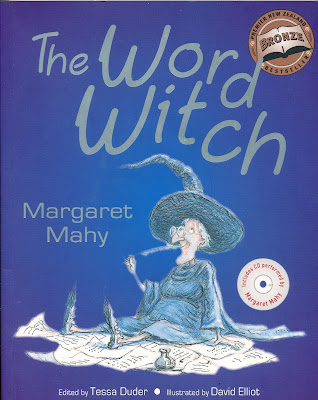 This was a gift from the lovely dinahmow, who knows of (and shares) my love of words.  Margaret Mahy is a poet from New Zealand - and most certainly a word witch.  Limericks, haiku, bouncing, dancing rhythms.  And fun.  Lots of fun.  And wisdom.

This excerpt is the first verse of Puck's Song.

'I'm in love with the wind, and the sky and the sea;
I am part of the earth, and the earth's part of me.
I love the green hills that for ages gone by
Have stood with their crests in the blue of the sky'. 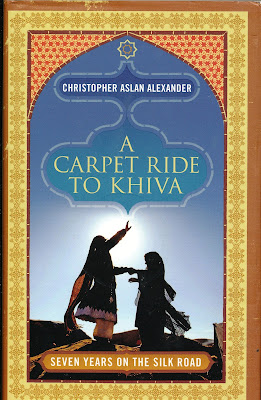 The smaller portion is planning another jaunt overseas.  He is talking of travelling part of the Silk Road so when I spotted this book at a recent Lifeline bookfair I bought it for him.  And read it first - because I am like that.

The author originally travelled to Khiva in Uzbekistan (which is on the route of the silk road) to write a guidebook.  He got sidetracked and stayed, immersing himself in a world of silk and forgotten 15th Century carpet designs, and where he set up a workshop employing locals from a depressed economy to remake those carpets - and with the assistance of those locals designed and created others.

An early snippet from the book cited a note posted in the staff room at his old school.
'Beware C. Alexander.  Jumps in deep end and cannot swim!'
And a very prophetic note it was.  When first he went to Khiva he knew no-one and had been learning the language for three months.

He survived.  And thrived.  When he was banned from re-entering Uzbekistan in 2005 he grieved.  And this book shows why.  He found family there.  And meaningful work.  Reading his book I learnt about carpet making, Uzbekistan's history, culture and food, and more.  And applauded his efforts.

Everywhere he went he met with the kindness and generosity which has also characterised my smaller portion's dealings with Islamic people.

When the book was written (published in 2010) he was still in contact with friends/family/workers from the carpet workshop but lived in the Pamir mountains on the Tajikistan/Afghanistan border running 'Yak-Yak', a project combing yak-down from the numerous yaks of the High Pamirs to be spun and knitted into fair-trade knitwear.

I strongly suspect that recent events in Afghanistan mean that he is no longer there - but feel certain he has  again jumped into a deep end.  And hope he has learnt to swim. 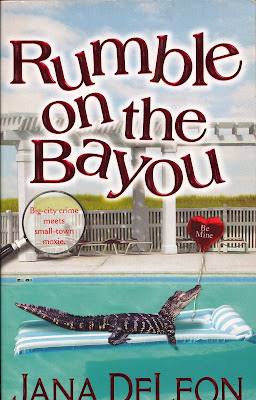 And now for something different.  Rumble on the Bayou was Jana DeLeon's first novel - and was a hoot.  It was another I picked up at the bookfair - where I was sucked in by the blurb.
'Deputy Dorie Berenger knew it was going to be a rough day when the alligator she found in the town drunk's swimming pool turned out to be stoned.  On heroin.'

Definitely a rough day.  Not boring, but challenging.  Which sums up the book.  It keeps a fast pace, is unpredictable (except for the outcome of the love interest) and is a heap of fun.  Racy and rollicking.  Another book which led me to immediately read another by the same author. 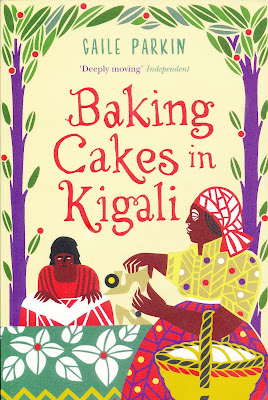 And the last is different again.  It is strongly reminiscent of the No. 1 Ladies' Detective Agency series - but I think deeper and somehow more human and moving because of the additional depth.

Angel Tungaraza runs a small business baking cakes in Rwanda's capital Kigali.  Family disasters mean that she and her husband have the care of both their son's and their daughter's children.  As Angel's customers tell her their stories she realises that each of them has things to mourn as well as things to celebrate.    Which is true of her too.

It is a gentle and charming book, which touches on tragedy and shows how the human spirit, perhaps particularly when pushed to its limits, endures.  And unifies us.  A tribute to kindness and hope.