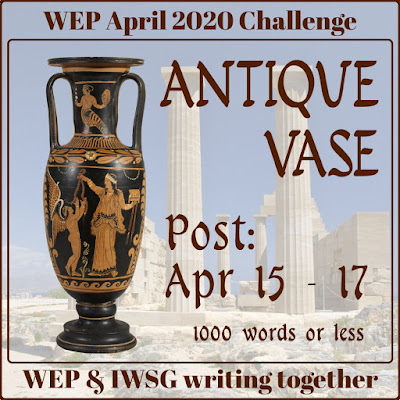 The WEP/IWSG Challenge is back.  Huge thanks to the organisers and participants.  A visit HERE will give access to a range of talented (so very talented) and different takes on the theme.  I do hope you will visit others and applaud them.  Names will be added over the next couple of days and a revisit is always worthwhile.

It is early days yet, but I have already found stories to delight me, been amazed by one prompt (with a myriad of rabbit holes for me to dive down), have wept at one and laughed (definitely out loud) at another.  There is sooo much talent in this group, and the range of stories is incredible.

As is always the case I struggled with this prompt.   I am wobbling on a personal soap box here.  Covid 19 has effortlessly crossed borders: geographical borders, borders of religion, gender, age, affluence...  However, as is so often the case, the vulnerable in the community are hit hardest.  And in many cases, their supports have been removed. Which makes my heart ache.

One group who have been further endangered by the virus is those at risk of family violence.  Shelters have closed, funding has been diverted, and families have been locked down together.


past tense: snapped; past participle: snapped


break suddenly and completely, typically with a sharp cracking sound.


PETER fumed.  In the weeks after Sara left the flames of his initial rage had been replaced with a slow cold burn for vengeance.


How dare she!  How very dare she!  Throwing it all away.  Their lawyers had agreed that Sara would have safe passage and could come to the house in his absence (HIS HOME) one last time to pick up her clothing, some essential papers and precious mementos.  That ugly antique vase that she treasured was specifically included.  Treasured more than their marriage!!!!


They might have agreed.  He had not.  Today was the day.

He left the house at the usual hour, dressed in his work clothes in case anyone was watching, parked the car out of sight several blocks away, doubled back, let himself quietly in the back door and continued his preparations.


As instructed what right did they have to instruct him!  the clothing she had left behind, her jewellery, her passport, her tax papers, photos of her family and her laptop were in the kitchen.  In a neat pile.  She might not recognise them in their current form but they were all there.  Shattered, torn, drenched in piss and petrol but there.


The vase her grandmother left her was there too.  He had spent hours and hours sharpening the largest shard to a razor edge.  Shard in hand he went to the darkened front room and waited.


And waited some more.  She was never on time, something he had often been forced to speak to her about.


Her car pulled into the driveway, the door slammed, and he heard her key in the lock.


As she headed down the hall to the kitchen he heard her say 'I am fine.  His car wasn't here, the house is dark.  I will be in and out of here in less than half an hour.  Love you' .  He smiled and quietly padded down the hall after her.


She turned the light on in the kitchen, gasped and started to sob.  She sobbed and he laughed as he pulled her into a tight embrace.   'You should have realised just how good your life with me was' he snarled as he sliced that razor sharp precious memento across her throat.  A plume of blood arched across the kitchen and he let her drop onto the pile of things she valued.   The gush of blood slowed to a trickle.  Still laughing he emptied the rest of the can of petrol over her body and stood beside her unlit pyre...


And in his defence the court was told that the stress of his marriage break down made him snap...

SARA didn't trust him.  She knew that he wouldn't give up so easily.  She was a possession in his eyes, a possession who had no right to seek her freedom.  Oh yes, the lawyers had said that she had safe passage for this one day (so long as she came alone), but it didn't hurt to check.


She got up early.  Very early.  Binoculars trained on the front door she watched the lights go on in the house.  First the bedroom then the bathroom and finally the kitchen.  She watched the lights go out again, and saw him emerge and carefully lock the door behind him.  He looked unchanged, and the direction his car headed was the same as always.  She watched.  She waited.  There was no sign of him and the house was still and dark.


Nearly two hours later the house was still quiet.  She got in her car and drove to the house for the last time.  Her phone rang as she parked.  'Yes mum I am fine.  His car wasn't here, the house is dark.  I will be in and out of here in less than half an hour.  Love you' .


She headed to the kitchen, turned the light on, gasped and started to sob.  She really shouldn't have expected anything else.  Furious and heartbroken she cradled a sharp and jagged piece of the vase which had always stood in her grandmother's home.  The vase her grandmother had left her.  Her only memento of that precious woman.  It had been so beautiful.  Elegant.  Richly coloured in deep, deep blues and burgundies.  It had begged to be touched.  She had stroked it each time she went past as a child, and each time she came in or went out the door of the house she shared with Peter.


The squeaky board at the kitchen door shrieked a warning.  Still holding that shattered piece of her history she whirled round and lashed out as he came through the door at her.  Slashed out and connected.  A plume of blood arched across the kitchen, spraying her, spraying the walls.  He collapsed onto the pile of things she had valued, and the gush of blood slowed to a trickle, then stopped...


And in her defence the court was told that the destruction of all her possessions and her fear of what he might do made her snap...