The smaller portion is back on the general wards, where thankfully there is no talk of immediate discharge (yet).  He is still on oxygen, but is eating (tiny, weeny amounts) and sounds and looks a lot better.  I have my fingers crossed that they will keep him until the weekend and that they will take him off the oxygen for at least 12 hours before discharge.

Still not walking.  But sitting up which is a step in the right direction.  The hospital is giving him massive doses of intravenous diuretics to try and dry up the fluid on his lungs (and everywhere else).  And today, the guy in charge of ICU pointed out that it was probably a bit counterproductive to have him on a drip to keep him hydrated and to also be feeding him huge amounts of diuretics.  And he is more than likely right.  So the drip has been removed.  One less tube would have to be a big relief.

At his request I took in a mirror when I went to the hospital this afternoon.  His response:  'Well that's my last shave.'  A pity, now that I have got over the shock I rather like it.  I will take up a camera tomorrow - many people have offered me significant sums of money for a clean-shaven photo. 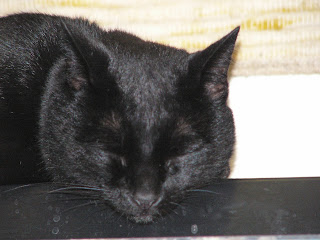 I am also told that his nephews (late teens, early twenties) would really, really like photos of the collapsed veins, the multiplicity of bruises and the staples holding his tummy together.  And I suspect the smaller portion would be happier sharing those photos than the ones of his unbearded visage.

He made me snort yesterday by saying that he had to grow his beard back to match his passport.  Osama Bin Smaller Portion come on down.  He had been growing it since 1974 or 75 and it was a bushy horror (or a luxuriant growth depending on your viewpoint).
Posted by Elephant's Child at 18:11