A bit of a mixture

This week has not been dull.  Not at all dull, but parts of it I could have done without.

On Monday afternoon I went to a family afternoon tea.  Three generations of family (including half and step variations).  I was not a happy chappy when I realised that I fell into the oldest generation.  I had thought I had escaped age issues, but obviously not.  I believe that family occasions have striking similarities to a trip through a minefield.  Still I survived, and also annexed a book from the brother in whose house we were gathered.  The book was 'Ruthless Rhymes for Heartless Homes' which he had snaffled while we were cleaning out my parents place.  I was strongly reminded of this book by a recent post by Paper Chipmunk.
A victory.  I had survived the afternoon tea, AND reclaimed a book I love.

So we went home.  And here is where it gets a bit sad.  It was garbage night.  Pushing a wheelie bin to the curb I overbalanced and planted my face into the road.  Hard.  Fortunately I had my mouth shut because while my lip is severely lacerated both inside and out, if I had had my mouth open I would probably have lost teeth.  So I now have a large, ugly and painful scab covering most of my top lip and extending to just under my nose.  My nose is red, swollen and bruised and also has lacerations.  I have grazes on both my hands and my feet.  My left leg is the one that MS has left likely to collapse under me.  So it also suffered.  It is so bruised and swollen that it looks as if my knee extends to half way down my calf.  And yes, it collapses even more often at the moment.  Woe, woe and thrice woe.

However, now comes the amazing part.  I was dripping copious amounts of blood on the road.  Somehow, I didn't get a drop on my white trousers or shirt.  How likely is that?

Irritation the second.  My smaller portion has an antique clock he inherited from his parents.  It has a nasty habit of stopping working from time to time.  Himself does not have the patience to fix it, but is a grumpy so and so until it is working again.  Naturally it broke down on Monday.  On Monday night I was in too much discomfort to sleep so I spent literally hours coaxing that clock back into working order.  I retired to bed around 2 am, having fixed the damn thing, leaving it on the kitchen bench where I had been working.  On Tuesday morning the smaller portion moved it to its usual spot.  He did not take sufficient care and it stopped working again.  So guess what I spent yesterday doing?  Many more hours later it is back in its usual spot, ticking, chiming and bonging happily.

All is not doom and gloom however.  I have been thoroughly enjoying these visitors.  Firstly the wattle birds who love our camellias.  They also make me smile because they swoop Jazz.  And, less often, Jewel.  (I apologise for the blurriness of some of these shots.  They move very, very fast. - clicking on any of the photos will make them larger) 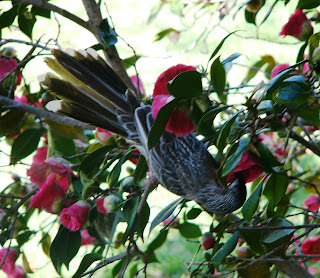 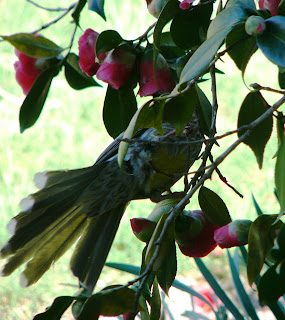 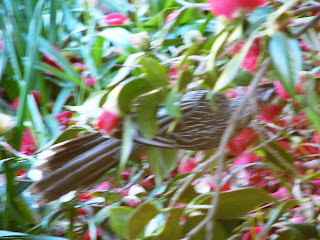 We have also had these visitors. 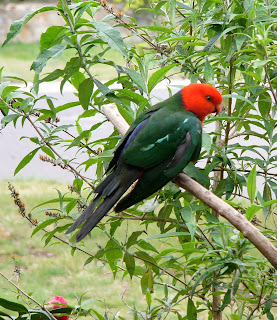 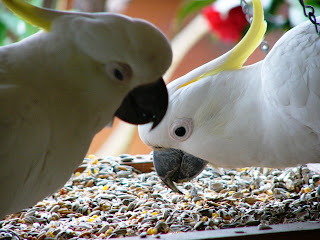 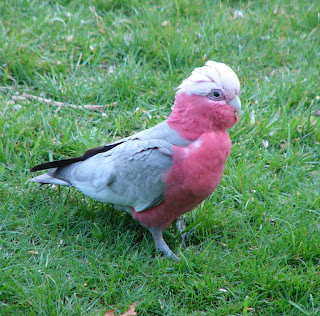 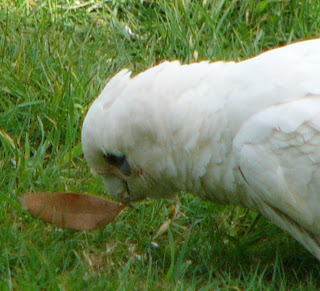 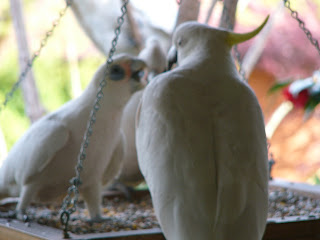 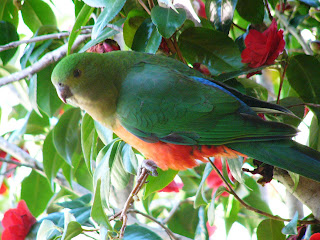 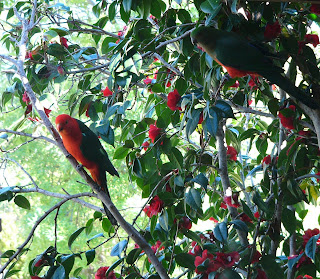 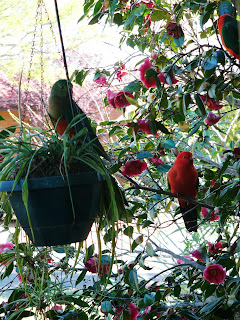 A never ending source of joy and delight.

And today we went to Tuliptop Gardens (another spring flower extravaganza).  It was heaven on a stick.  I took 397,463 photos (approximately) and when I have had a chance to go through them I will share them.
Posted by Elephant's Child at 17:53