Like River, I generally run with a theme.  This week has been a bit fraught, so it isn't a theme so much, as snippets from the week.  Clicking will as usual embiggen.

This King Parrot having a 'bad feather day' made me smile. 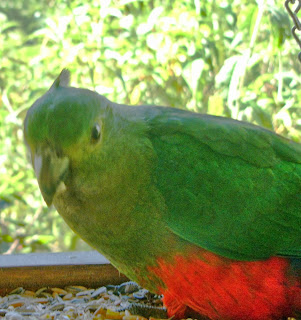 As did the Eastern Rosella pigging out on green apple. 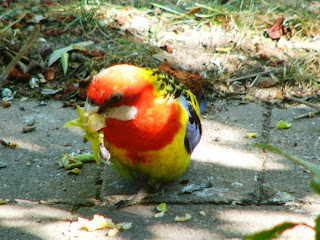 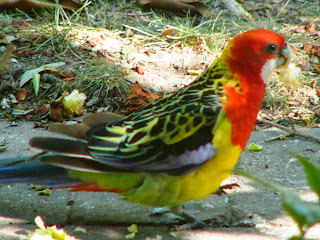 The plumbing/toilet debacle didn't make me smile.  Sadly the toilet blocked again.  And I was forced to call a plumber (a different company needless to say).  In a very short time he came back with bad news.  The problem was major and our driveway would have to be pulled up and the excavators brought in - at huge expense.
Sadly we agreed.
Tuesday morning the team arrived - when they said they would.  And started work. 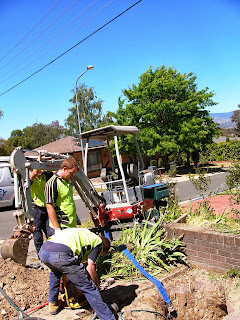 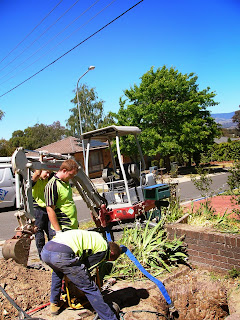 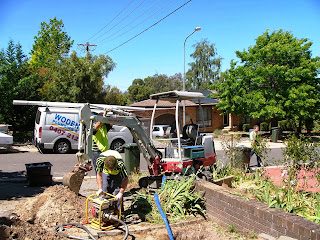 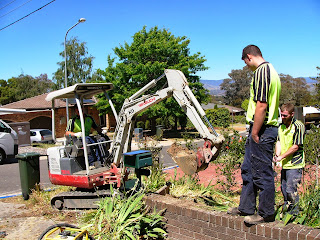 Shortly afterwards we got some (sort of) good news.  The problem wasn't with our plumbing.  The local council's sewer pipe had collapsed.  Mind you, the digger in these photos is parked on one of my bulb beds and the holes on either side of the wall were deep enough for the workman to be concealed when they stood up in them.  Many, many bulbs are irises were squashed and dug up (and are currently in the garage waiting to be replanted).  The council was called - and seven hours later replaced the sewer pipe.  They will meet some of the obscene cost - amount yet to be determined.  They won't meet the cost of putting the driveway back.
These plumbers were efficient, courteous and did as little damage as they could.
The previous plumbers have not replied to my letter - or responded to phone calls.  A mistake.  I have written to them again saying that since the work they billed me for did not and could not rectify the problem I thought they they should give me at least a partial refund.  I added that if I had not heard from them in seven days I would take the issue to the Department of Fair Trading.  So far they have been silent.  They will be sorry.
I will write to the current plumbers as well - to say thank you.

And to finish on a high note - the bottle brush (Callistemon) in our top garden is flowering most beautifully - a treat for the birds, the bees and me... 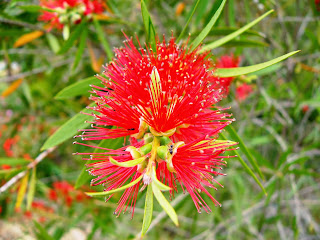 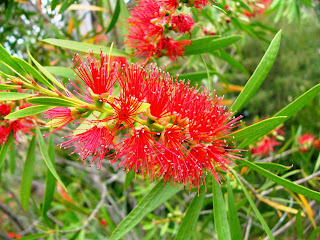