Yet  another post about my greedy reading.  Please feel free to skulk away if you are over this obsession of mine.  This book was one which was given to me earlier this year. 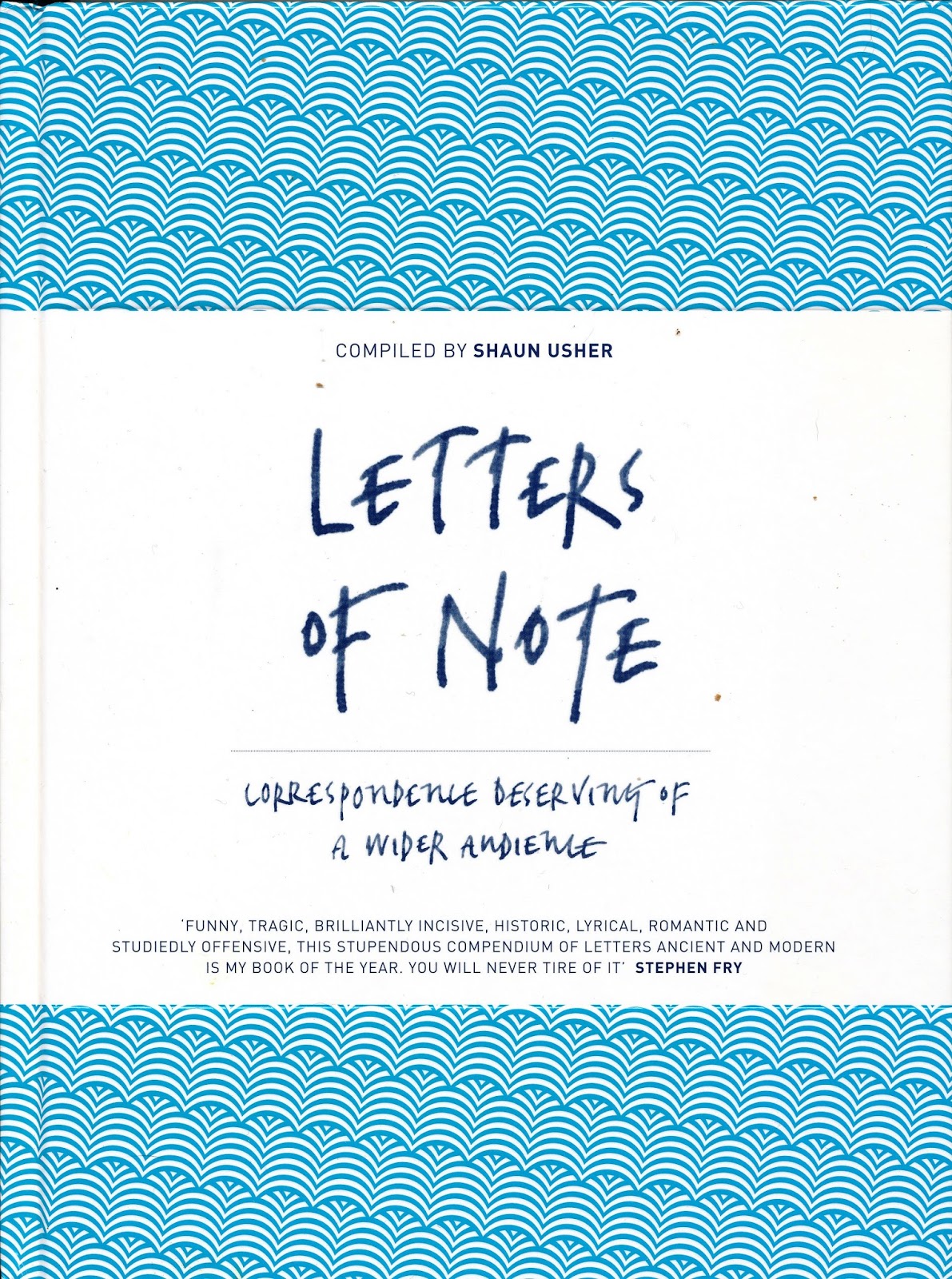 It was a gift from the skinny one - who knows my reading tastes well - though he doesn't share them.  At all.

It is a collection of over a hundred letters, ancient and modern, covering a huge range of topics and emotions.  Some, like Virginia Woolf's suicide note, I had read but most were new to me.   Another gem.

Mind you, I wouldn't classify all of them as 'letters'.  Written correspondence perhaps.  A minor quibble.

I hooted with mirth at the letter from Clyde Barrow (of Bonnie and Clyde fame) to Henry Ford saying among other things '...the Ford has got ever other car skinned and even if my business hasen't been strickly legal it don't hurt enything to tell you what a fine car you got in the V8'.

I was fascinated to see the expression OMG used in a letter to Winston Churchill - in 1917.

I winced at a letter from a Japanese 'kamikaze' pilot to his children.

There is a letter from John Lennon's killer, Mark Chapman, to a memorabilia expert wondering about the value of the Double Fantasy album he had autographed by Lennon earlier in the afternoon - before he shot and killed him.

In 1784 Benjamin Franklin wrote a letter, enclosing money and suggesting that in time, rather than repaying the loan to Franklin himself, 'when you meet with another honest Man in similar Distress, you must pay me by lending this Sum to him...'  Paying it forward has been around for longer than I knew.

Did you know that one of the first telegrams sent after the Titanic hit the iceberg said ' Underwriters have message from New York that Virginian is standing by Titanic and that there is no danger of loss of life'...?

But one piece in the book has haunted me.  I know that obituaries of prominent people and celebrities are prepared in advance.  Often years in advance.  I am even moderately comfortable with the concept.

I wasn't at all comfortable with a speech prepared for Richard Nixon 'IN EVENT OF MOON DISASTER'.

The speech assumes that the landing was succesful, but that Neil Armstrong and Buzz Aldrin had become stranded on the moon - never to return.  A contingency plan of sorts I suppose.

The part of the speech which distresses me is a little addendum to it.  I have reproduced it below.


'PRIOR TO THE PRESIDENT'S STATEMENT:

The President should telephone each of the widows-to-be.

AFTER THE PRESIDENT'S STATEMENT, AT THE POINT WHEN NASA ENDS COMMUNICATIONS WITH THE MEN;
A clergyman should adopt the same procedure as a burial at sea, commending their souls to 'the deepest of the deep', concluding with the Lord's Prayer.'

Tacky, tacky, tacky.  Not the speech so much (though it is high on hyperbole), but that it was considered necessary to remind the President that he would need to contact the 'widows-to-be' before he talked to the nation and the world.  And the use of that phrase to describe the astronaut's wives also makes me feel unwell.  I am not comfortable with the idea that they would essentially be left to die alone either, with communication cut while they were still alive.  Perhaps I am naive.  Certainly not comfortable with this speech.

Mind you, this was the only correspondence in the book which did make me feel unwell.  Some of the letters were beautiful, some hilarious, and others sad.  Many were very very moving.  The sub-title to the work is 'Correspondence deserving of a Wider Audience' - and I would wholeheartedly agree.