Relatively recently, rhymeswithplague put up a post about the things his parents used to say which got me thinking.

I think most families have some phrases in regular use.  They can form an unbreakable code to outsiders, and act as a kind of shorthand within the family.  For example, rhubarb is always known as 'thumb' in our family after a brother's mishap when preparing it.  And my father called all sauces gravy.  I remember seeing visitors cringe when he offered them gravy for their ice-cream.

Both of my parents had a treasure trove of phrases which they trotted out on a regular basis.  Some of them were true, some were helpful, and some decidedly the opposite.  Some were just odd.

As a child I had difficulties with the concept of left and right, and could never remember which was which.  My ever so helpful father told me 'Your left hand is the one with the thumb on the right'.  Why thank you Father.  Thank you so much...

How about you?  What helpful (or otherwise) things were you told?  Have you carried them forward or started new secret codes of your own?

The smaller portion and I have adopted and adapted a phrase purloined from another family.  A workmate told us that while on a country drive her youngest daughter had pointed at a cattle truck and said 'oh look!  That nice man is taking his cows for a drive.'   More than twenty years later we still refer to nice men taking a variety of things (garbage, furniture...) for a drive. 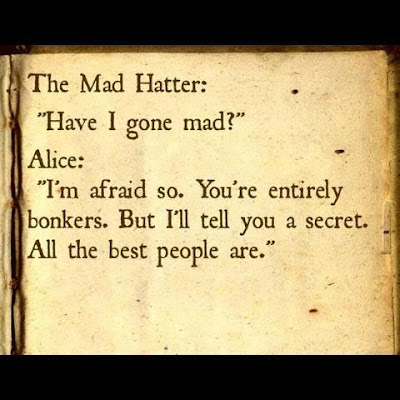