Yet  another post about my greedy reading.  Please feel free to skulk away if you are over this obsession of mine.  A couple of years ago the skinny one gave me Letters of Note compiled by Shaun Usher.  I loved it.

Last week, despite having just completed an overdue book cull, when I spotted More Letters of Note, I knew I had to have it.  So I succumbed.  The price was good too. 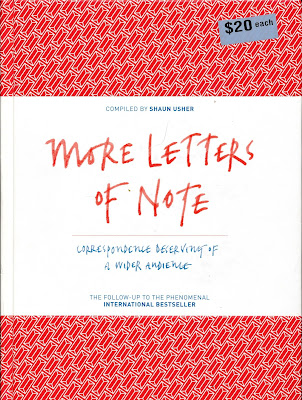 Shaun Usher also has a website which you can find here for you to explore.

The letters are amazing.  Beautiful, moving, tragic, funny.  Letters written by politicians, eminent scientists, celebrities, letters written by the unknown.  Some of them were familiar to me, most were not.

More Letters Of Note has 122 letters in it.  Some are short, some very long.  Some I would call written communications rather than letters, but they are all as the subtitle suggests 'correspondence deserving of a wider audience'.

I guzzled it, neglecting other reading and rather a lot of tasks from my to-do list.  I suspect I will revisit this book, just as I do its predecessor.

A taste of some of the letters I loved follows.

On August 12  1985, Japan Airlines Flight 123 from Tokyo to Osaka crashed, killing all but four of the 509 passengers and 15 crew on board.  Those on the plane had 32 minutes from realising that the plane was in trouble to the crash.  Many wrote letters to their loved ones.  These missives are now known as the JL123 Isho (last notes).  Now, of course there would be phone calls and texts.

Samuel Clemens (Mark Twain) was an early adopter of the 'new fangled writing machine' - and apparently the first author to submit a typewritten manuscript to his publisher.

A letter from Jane Austen to her sister Cassandra surprised me.  It is titled 'I drank too much wine last night'  and included the words ' I know not how else to account for the shaking of my hand to-day'.  She could be nasty too '...I was as civil to them as their bad breath would allow me.'

I chuckled at a letter from 13 year old Andy Smith to Ronald Reagan saying that his mother had declared his bedroom a disaster area and asking for federal funding to hire a clean up crew.

It includes a very short letter from Suffragette Bertha Brewster to the Daily Telegraph which I will reproduce in full
'Sir,
Everyone seems to agree upon the necessity of putting a stop to the Suffragist outrages; but no one seems certain how to do so.  There are two, and only two, ways in which this can be done.  Both will be effectual.
1.  Kill every woman in the United Kingdom.
2.  Give women the vote.
Yours truly,
Bertha Brewster'

It really is a book (and a website) full of gems.