As most of you are well aware I am a greedy reader.  I will read most things and my reading happily crosses genre and target age groups on a regular basis.

Finding new books and authors in the blogosphere has been a HUGE boon.

C. Lee McKenzie has a new book out.  Which I devoured when I was sent an ARC.

I really, really enjoyed it (as I have every one of her books I have read) so I happily signed up for the blog tour. 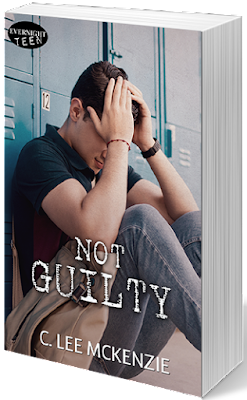 
A blood-smeared knife. One young man’s word against another. A lifetime dream crushed.


The evidence points to Devon Carlyle. He was there when it happened. Everyone knows he had it in for Renzo Costa. And Costa says Devon was the one. In the judge’s rap of a gavel, Devon’s found guilty of assault. The star of the Oceanside High’s basketball team loses his shot at the one thing he’s worked so hard for—the championship game where college scouts could see how good he is.


Now he makes his great shots in Juvenile Hall with kids far different from those that have always been in his life.


He’s bent on finding who did the crime. He’s bent on making them pay because he’s Not Guilty.


But can he prove it?

***
It is available now, and can be purchased from:

Australian readers can buy it from Amazon  here.

And, the very generous author, is giving away 5 digital copies and a $10 Amazon gift certificate, which (until midnight on Tuesday November 5) you can enter the draw to win a Rafflecopter giveaway


It seems to me (and correct me if I am wrong) that it must get crowded and noisy in your head as characters clamor to be heard.  Do any of them surprise you and demand bigger roles than you had planned?

Ah, yes. The clamor. While I was writing Not Guilty I had four major voices in my head almost every night. Ice needed to be heard. He was so special. Damaged by life’s circumstances, so talented, so vulnerable. My heart ached for this kid, and I had to see him safe somehow.


And Tats--that rascal was a pain in the arse, but I loved him and his get to the point attitude. He knew what Ice had to get out of his belly before he could move on with his life, and he said it. I gave him a big brother to set him on the right path. I know he’s still walking it.

Chewy was another one that tugged at me. He had a good heart; he just needed some guidance and a break from this world.

As to Devon, that boy grew up, and in my mind, he’s already on that college basketball team doing his school proud. He’ll be a good man.

The book I’m in the middle of writing now had a small character who suddenly took on a major role in the story. In fact, I’ve had to work at not letting her steal the show with her take-charge attitude. I’m beginning to think she’s my alter-ego, the person I’d really like to be. I’m enjoying writing all my wishful thinking into this character even if she does keep me awake a lot. I’m at 50K right now, so I figure I have another few weeks before she’ll be fully-fleshed out. Then I hope she’ll kick back and let me be during the editing process.

When it comes to editing, I love it. This is where I dig in as deep as my understanding of the craft and of my work will let me. It’s exciting to find the layers that my earlier drafts have skimmed over. I keep thinking there’s gold here somewhere. Please let me find it. I’m in charge during this part of the writing process. I tell my characters to step aside. "I’ve got this, guys. You had your say during the creative part, now let the author take over and tidy things up, okay?”

Thank you Lee.  I am always grateful to authors who share parts of their writing journey.

New comments are not allowed.