Have I mentioned I don't do things by halves?

Some of you may remember that the smaller portion and I went mad and each ordered about 450 bulbs.  Making a grand total of  900 bulbs (or so).  With nowhere to put them.  So heavy duty weeding, pruning and tidying was called for.

Twenty garbage bags of weeds later I realised we needed a skip.  And then himself and I had discussions about what size we needed.  He said the smallest (two cubic metres) and he could use the extra room (hah!) to clear out some of the crap in the garage.  I said we needed a bigger one and ordered a three cubic metre skip.  Which we have spent the week filling.  With garden produce.  The garage is as crap filled as ever. 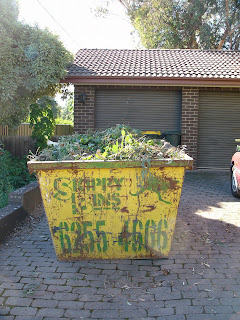 Not only is the skip full, the smaller portion (and a neighbour) have jumped up and down on it three or four times to enable us to nearly meet the requirement that it be filled no higher than the water level.

And we didn't finish.  By a long shot.  However, most of the bulbs have arrived so another skip and more of that sort of insanity in the garden will have to wait until we have planted the bulbs.  The remaining 50 to 100 bulbs are not expected to arrive for a fortnight.  Will we be ready for them?  I know not.  Perhaps.  Or perhaps I will have collapsed in a screaming heap. 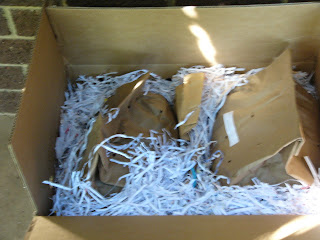 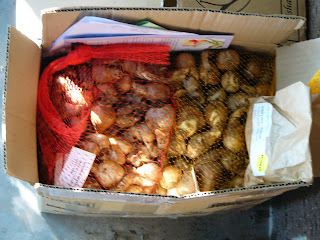 We do however have some space for planting.  The daffodils will go in first, then the iris and the tulips afterwards when hopefully the weather will have cooled down a little.  We can see down some pathways for the first time this season! 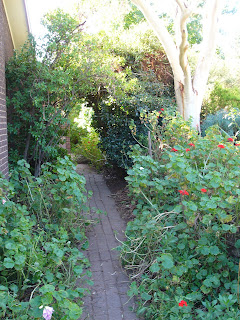 We have also uncovered some things that were largely hidden by the undergrowth.  Including some of last years bulbs (I had wondered whether they had rotted in our almost unheard of damp weather). 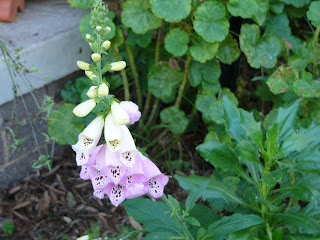 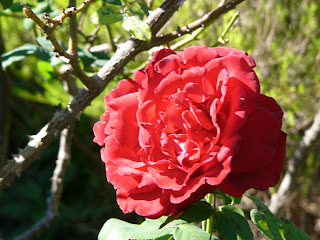 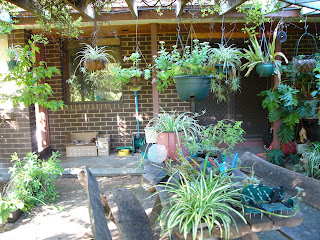 The vegetable garden on the other hand ... 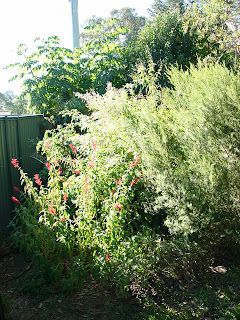 In the forefront of the photo is the pineapple sage, flowering its little heart out.  Also the lemon verbena (ditto).  There are many tomato bushes too.  And herbs.  All largely concealed by the rampant raspberries.  Which I have decided I will dig out and confine in a half wine barrel or two next year.  But bulb planting comes first, even though collecting the produce is like a jungle expedition.  The veggies just have to wait.

I am seriously impressed and surprised at our achievements this week. Or to be more accurate at my achievements.  Himself just needed the motivation, and most days I had done a few hours in the garden before he got up.   Bending is as difficult and painful as ever.  Reaching over my head is a new area of frailty.  But somehow it got done.  And I bought a long handed digger so I should (fingers crossed) be able to plant the bulbs.  I will probably put them in their little holes using the long handled barbecue tongs.  I plan to use the tongs to put the blood and bone as well so I guess we will need a new set of tongs.  A small price to pay.

I have just remembered (dammit) that tonight is a night I have to stick a needle in myself.  When that is over I plan to have (and enjoy hugely) a glass or perhaps two of red wine.
Posted by Elephant's Child at 16:20