This post is in response to comments made by  daisyfae, dinahmow and Strayer on a recent post.   I had posted photos of the blow-up penguin who lives in our en-suite, noting that silliness is often something I rely on to get me through difficult times.  The helpful commentators mentioned above thought that this penguin should have a more active role to play in our life.

Strayer asked if I talk to the penguin.  Well yes I do, but I also talk to myself, the cats and I mutter things at inanimate objects around the house.

Daisyfae thought that it would be a good idea to dress the penguin up and invite him to dinner.  He (I am certain that he is male) thinks that the outfit he is wearing is quite dressy enough.

Dinahmow saw daisyfae and raised her by suggesting that the penguin should come to the first meal at which the smaller portion ate a proper portion.  She also well nigh insisted that I took photos and blogged about it.

And here we are.  The penguin is too big to sit at the table - and the smaller portion prefers eating off his lap at the moment but the penguin loomed in a most satisfactory way. 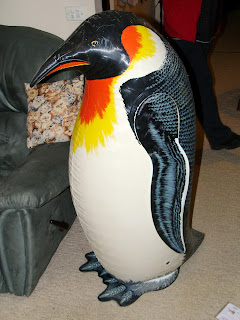 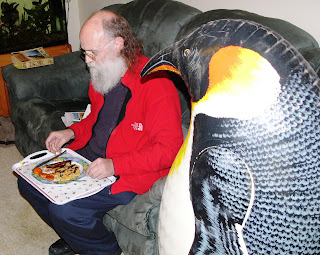 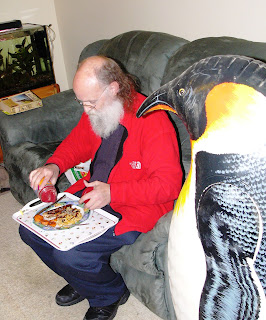 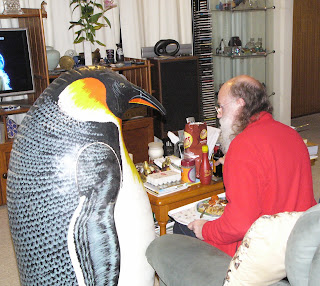 And the smaller portion ate all his dinner.  Including the carrots (which should not be part of his diet at the moment) which he and his sister colluded about adding to his plate.