The WEP (Write, Edit, Publish) Challenge so generously hosted by Denise Covey and Yolanda Renee is back.

This month (of course) the focus is on Valentine's Day.  We are asked to say what the day means to us - and can do so through fiction, non-fiction, photography...   Which leaves it wide open.

If you visit here and click on any names with a DL next to them you will be taken to some wonderful pieces. 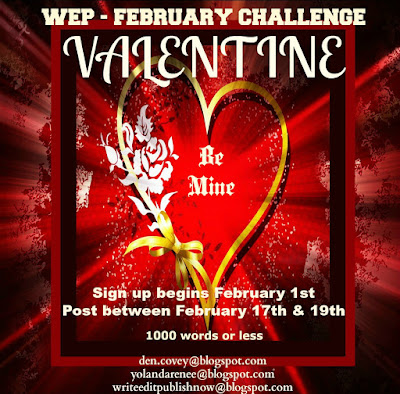 I am playing again - and have chosen to go down the non-fiction path this month.

I have shared my life with my partner, known among other things as the Smaller Portion, (because I resented my mother describing him as my better half, and I am taller)  for nearly forty years now.  We have shared good times and bad.  We are very different people and irritate each other on a regular basis.  And the foundation of our relationship is, as it has been since the beginning, love and laughter.

My partner would say that he doesn't have a romantic bone in his body.
He is a stranger to the truth.  He doesn't do the Hallmark sentimental card caper.  He does better.
Thirty years ago we lived in the country, rented an isolated farmhouse and commuted (by motorcycle) thirty miles or so to work in a large country town.  It was a quiet life, a pleasant life, a peaceful life.  Our nearest neighbours were only visible at night when we could just see the lights from their home.
Then I came down with glandular fever.  For the second time.  I had it badly and was a sick, grumpy and almost certainly fairly obnoxious puppy.  After a shower I was so tired I needed a rest before I could dry myself or dress.  I remember squeezing myself a glass of orange juice and being too tired to drink it.  I struggled for a while, and then took some time off work.
On Valentine's Day I heard (vaguely) the roar of the Ducati as he headed off to work.  And drifted back to sleep
Some eight hours later I was up.  I had even showered and dressed.  Which made it a good day.  A good day which was about to get better.  I had learnt (remember I said it was quiet) that If I put the jug on when I first heard the Ducati it was coming to the boil about the time he pulled into the drive.  On that Valentine's Day I was making his coffee when he came into the kitchen.  I went to hug him - but was waved away.
He unbuckled his jacket, reached inside and pulled out five glorious roses.
Five glorious heavily scented roses.
Five glorious and heavily scented champage coloured roses.
Five slightly crushed glorious and heavily scented champage coloured roses.
Both his shirt and those glorious roses were also spattered with drops of his blood, and shortly afterwards generously watered with my happy tears. 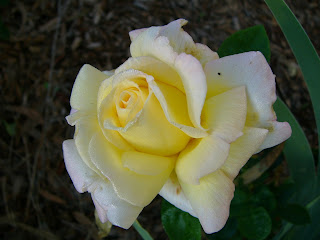 Bringing flowers home by bike was always going to be a challenge because the bike had no panniers and he hadn't taken a shoulder bag with him.  Down his jacket was the only place they had any chance of surviving the thirty mile trip.
Florists remove the thorns.  Florist's roses have no scent.
He knows that I consider a rose without fragrance a travesty and a tragedy.  So he had gone to a house in town whose rose garden I had often admired  and convinced the owner (who we didn't know) to sell him some of her best roses, and had ridden home with them pressed against his heart.  This from the man who finds talking to strangers difficult and doesn't have a romantic bone in his body.

My heart melted.  And continues to do so on a regular basis.