Another Block-Buster Exhibition at the Gallery

We are lucky enough to live in the same city as our National Gallery.  Each year a special exhibition (usually of the old Masters) is staged over a period of three or four months. The most recent (it finished this week) was an exhibition of the works of Henri Toulouse-Lautrec, an artist whose works I have always loved.

We avoided the gallery over Christmas and the school holidays not wanting to see the exhibition with a million other people.  Then the skinny one was in hospital and after that convalescing.  Last week we finally got there, just in the nick of time.  I would have been very sorry indeed to have missed the first large retrospective of Toulous-Lautrec's work to be shown here.

Photography within the Gallery is banned so the pictures are scanned from items I bought after the seeing the exhibition.  And I would have loved to have bought rather a lot more.

He died shortly before his thirty seventh birthday.  At one time I would have thought that he lived to be ancient and now mourn that his life was cut so short.

Despite being born into the French aristocracy he painted not the upper echelons of society but instead people from the dance halls, cabarets and brothels - mainly in the Monmartre district of Paris.  I love that he captured character in vivid snapshots and his use of  body language to enhance the images.  I also love that  he did not sanitise his subjects.  He had a reputation for making his subjects appear 'inelegant and ugly' but I don't agree at all.

Enough waffle from me.  Instead, I give you scans of some of the things which I couldn't resist buying - though I may never send them to anyone, hoarding them instead.  As always clicking on the pictures will enlarge (embiggen) them. 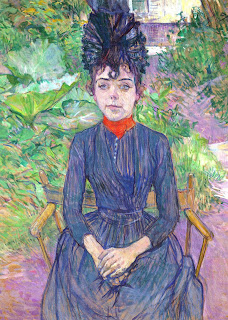 Justine Dieuhl:  woman in a garden 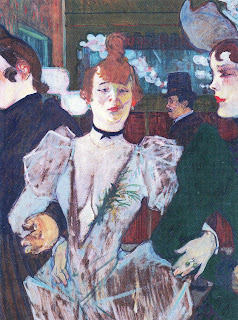 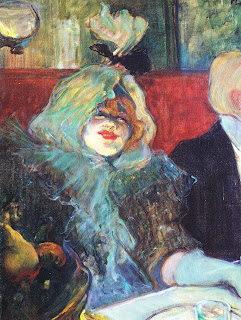 He also (which I hadn't known) sketched birds and animals, I think with a lot of charm. 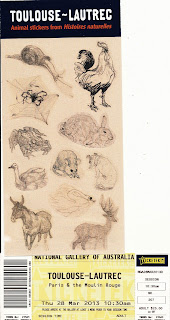 He is renowned for his poster design, often creating posters advertising the work of his friends. 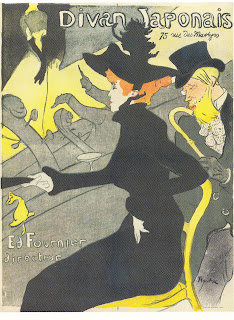 And something which I, a confirmed cat lover, couldn't resist.  Envelopes featuring his stunning black cats.  I have scanned both the front and the back of the envelopes.  Again, I may never send them to anyone.  And if I do, the recipients should know just how privileged they are. 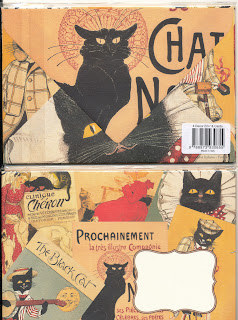