A book which made me think....

I suffer from insatiable curiosity, so it is hardly surprising that biographies, autobiographies and memoirs are among my most favourite reading material.

Being invited into another person's world can be exciting, inspirational, challenging - or any number of other emotions.  It is always a privilege.

I recently completed this book. 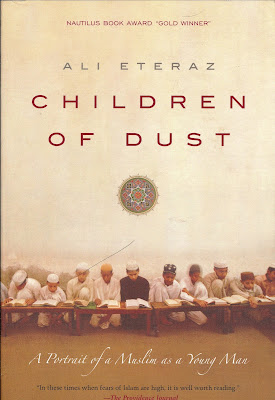 It was one I picked up when the book shop at my local shopping centre closed down, and it has been languishing on my unread pile for some time.

The blurb on the back fascinated me 'Ali Eteraz tells the story of his schooling in a madrassa in Pakistan, his teenage years as a Muslim American in the Bible Belt, and his voyage back to Pakistan to find a pious Muslim wife...'  A window into a life very different from my own.

The author's father made a covenant with Allah that if he was given a son, that son would become a great leader and servant of Islam.  A son was born - and was named Abir ul Islam (Perfume of Islam).

Striving to keep that covenant guided the author's life for more than thirty years.  He studied at not one but several madrassas.  He rejected the companionship of non-Muslims.  After Osama Bin Laden's strikes against America he strove to become a reformer of Islam.

At intervals in his life journey he changed his name, to better reflect his path of the moment.  While a fundamentalist Muslim, convinced of the superiority of Islam  he called himself Abu Bakr Ramaq.  In this phase he returned to Pakistan in the hopes of finding a Muslim wife - to protect him from sexual temptation.  And prejudices against the 'American' he was assumed to have become put his life and that of his family in danger.

On his return to America he reverted to being Amir ul Islam, and toyed with anti-Islamic ideas at University, while continuing to remain associated with Muslims and becoming the president of the Muslim Student Association.

I really didn't warm to him.  He was never more pious than when he was using his religion to get access to women - preferably devout Muslim women.  And his ongoing determination to marry a Muslim woman (and a devout one who would wear the hijab) was as far as I could see, the 'best' way he could think of to relieve sexual frustration.  And he did want a 'name' for himself, but I wasn't certain that whether this was to meet the terms of his father's covenant or to satisfy his ego.  He dabbled in political protest - and again, it seemed to be more about the status for him, than for the causes he was espousing.

And then came the attacks on Washington and New York.  And his attitudes didn't, as I feared they would, have me flinging the book aside.

'I felt an unbridgeable distance from those militants across the globe, that I'd long ago felt drawn to and then, more recently, had felt pity for.  I had used to think that while their methods were disreputable, they were simply misguided....'
'Now having seen their vision of justice, and recognising how far it was from actual justice, I felt only anger.  What made their actions even more reprehensible was that they had carried out their murders in the name of Islam.  In a single moment they had destroyed all the hard work - of education and awareness - that Muslims the world over had done over the years'.

I have no arguments with these statements.  None.  As a reformer he changed his name again, and he is now Ali Eteraz, and his journey continues...

I found the book fascinating and infuriating by turns.  I thought that the time he spent in the madrassas could only be described as child abuse.  Religion, any religion, is almost incomprehensible to me, and I thought his piety was often manipulative and I found it distasteful.  That said, I have felt very similar distaste for noisy proponents of other religions, including Christianity.

I can't say that I 'enjoyed' Children of Dust, and I will probably not read it again, but I am glad I persevered.  Very glad.

Email ThisBlogThis!Share to TwitterShare to FacebookShare to Pinterest
Labels: reading