I am seriously knackered.  However it is a good  knackered.

The usual Saturday tasks happened - washing and changing sheets etc.  (And I love the smell of clean sheets - if there was a clean sheets fairy I would have them every day).  And sweeping of the back deck.

And then I finally finished the curtains and himself hung them for me.  The hanging needs some adjustment (a bit of bunching) but they are a decided improvement.  Both of us are pack rats and the room needed lightness so the plethora of things could be seen.  And grotty green velvet is not a suitable backdrop for much.  If anything.

Then I was on a roll.  So I made some pistachio and golden raisin fudge.  A bit of a worry.  It is simplicity itself to make and unfortunately even easier to eat. 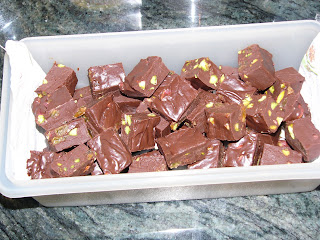 And then I went on to make a zucchini crust pizza. 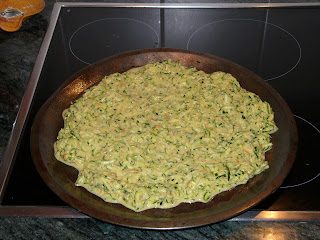 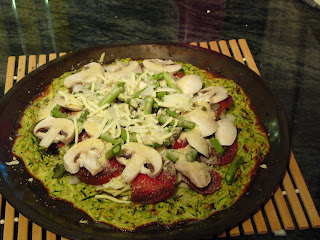 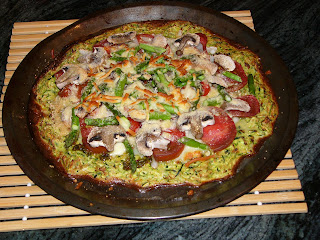 The first photo shows the crust before its first stint in the oven.  It didn't turn out quite as crisp as I would have liked - think zucchini frittata, but the taste was good.  And himself was having steak so I had the pizza to myself with mushrooms and asparagus and tomatoes from the garden and onions and garlic and a little cheese.  Next time I will probably turn the oven up but it was a satisfactory experiment.  And there is plenty left for tonight and probably tomorrow.

This morning we went to the markets.  Flowers for the house - a regular luxury, sour dough olive bread (ditto) and a birthday present for my nephew in California.  This is scary.  I was not a good aunt and now I am a great aunt - five times over.  And I have never met my nephew's wife or their boys but I email with them LOTS and she makes my day on a regular basis.

When we came home from the markets the cats were in mad mode.  I can only assume that there is red cordial in their whiskas.  Jazz was running through the house at full pelt, leaping to the cook top, then to the fridge and climbing from there to behind the cupboards.  A feat he was very pleased with.  It is disconcerting to hear loud purrs emanating from behind the cupboards.  But lovely.  When he re-emerged Jewel ambushed him and the chasing games began again.  A hoot to watch.

So, I did the ironing and have done very little of a productive nature since.  One of the smaller portion's aunts liked ironing because it is 'quiet and clean' but I can't agree.  But she had five children and I would think that quiet and clean jobs were rare.

No gardening happened, but the weeds will wait for me.  They will grow true, but they will still be there when I get into the garden next.  And I am thinking of all the spring bulbs I want to put in .....
Posted by Elephant's Child at 16:51