Life and the Universe

Things are much more better since my last post.  I am still having some difficulties with my body, but much less.  Consequently I am also whinging less.

The garden is finally producing edible things for my delight.  And more each day.  Chutney making will be essential. 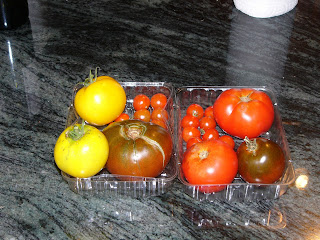 In the trays there are cherry tomatoes (very prolific), some mellow yellow(s) - which are very sweet, a couple of black russians which have split due to the rain but still taste great and some red braggers - a variety I hadn't come across before this year.  And I will plant them again.

The herbs and the climbing spinach are also thriving.  The raspberry canes are rampant.

I have also continued to make curtains.  We had to buy more hooks today and I have been disinclined to hang the damn things, but there is now only one drop left to complete. 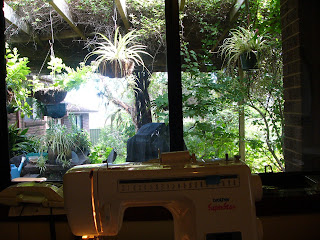 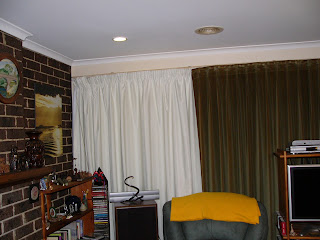 The first photo is the view of the back yard jungle I get from my sewing machine, and the second photo is drop the first in place.  The curtains they replace are made of green velvet which predated us in this house.  They are manky beyond belief and I suspect would disintegrate in the wash - so I haven't tried.

I have also been reading.  I have just finished a biography of Mary Proctor - Convict, Pioneer and Settler.  Truly amazing.  She was transported to Van Diemans Land in the 1820s as a teenager for the crime of receiving stolen goods (some clothing which she may or may not have known was stolen).  While in Australia she was present at a huge number of the significant events in our early history.  She and her husband (she married another convict) cleared land for farms in both Tasmania and Victoria.  She was living in Victoria when it was granted statehood.  She, her husband and their children were part of the gold rush and probably the Eureka stockade and a grandson rose to become Superintendent of Mining and was presented to the King and Queen.  An amazing story of an ordinary woman.

It occurs to me that I have been bad mouthing Jazz the psychotic.  Jewel has her moments too.  She is the one who wakes me at 2.30 to watch her play acorn and applaud her cleverness.  And it is she who follows behind me in the garden when I am planting bulbs and digs them up and snorts the blood and bone I add to each little hole. Crack cocaine for cats.   Nonetheless I love them both.  Jazz can now open the fridge - so we had to install a child proof lock and he has now taught that little trick to Jewel. 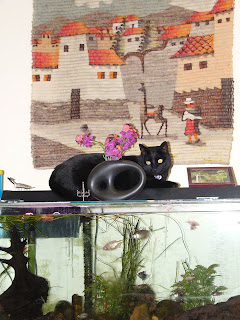 They are both ensconced in the wardrobe at the moment.  In the lower photo Jazz is reclining on the light over the fish tank - warm and entrancing for a cat.
Posted by Elephant's Child at 15:55