I fell in love with Calvin and Hobbes the first time I read one of Bill Watterson's stunning cartoons.  Over the years my love affair deepened.  I bought all of the books as they became available.  I still reread them and the smaller portion and I quote them at each other.

They are a joy on many levels and for many reasons.  The drawings are a delight.  In turn I have empathised with rebellious Calvin - and his poor put-upon parents.  He made his teacher's life hell.  Calvin loves nature and hates organised games - except Calvin Ball which has only one rule - that it cannot be played the same way twice.  And in Hobbes, he has the best friend anyone could ever ask for.  Someone to fight with and fight for.  Someone to have fun with, and a companion on the darkest days.  An alibi - and a scape goat.  Some of the cartoons are hilarious, others moving and/or thought provoking.

When Watterson stepped aside and retired the series in 1995 I grieved.  Twenty years on, my love affair with Calvin, and more particularly with Hobbes continues.

Watterson has always shunned publicity, and stayed out of the public eye when ever possible.  He gave his last interview to a journalist in 1989 and last spoke publicly in 1990.  Essentially he has out-done Greta Garbo.

To me at any rate, the quirky charming characters are much more important than his personal life.  Just the same I wondered whether he had a Calvin in his life - or had perhaps been a Calvin.  So I was more than happy to be given his biography. 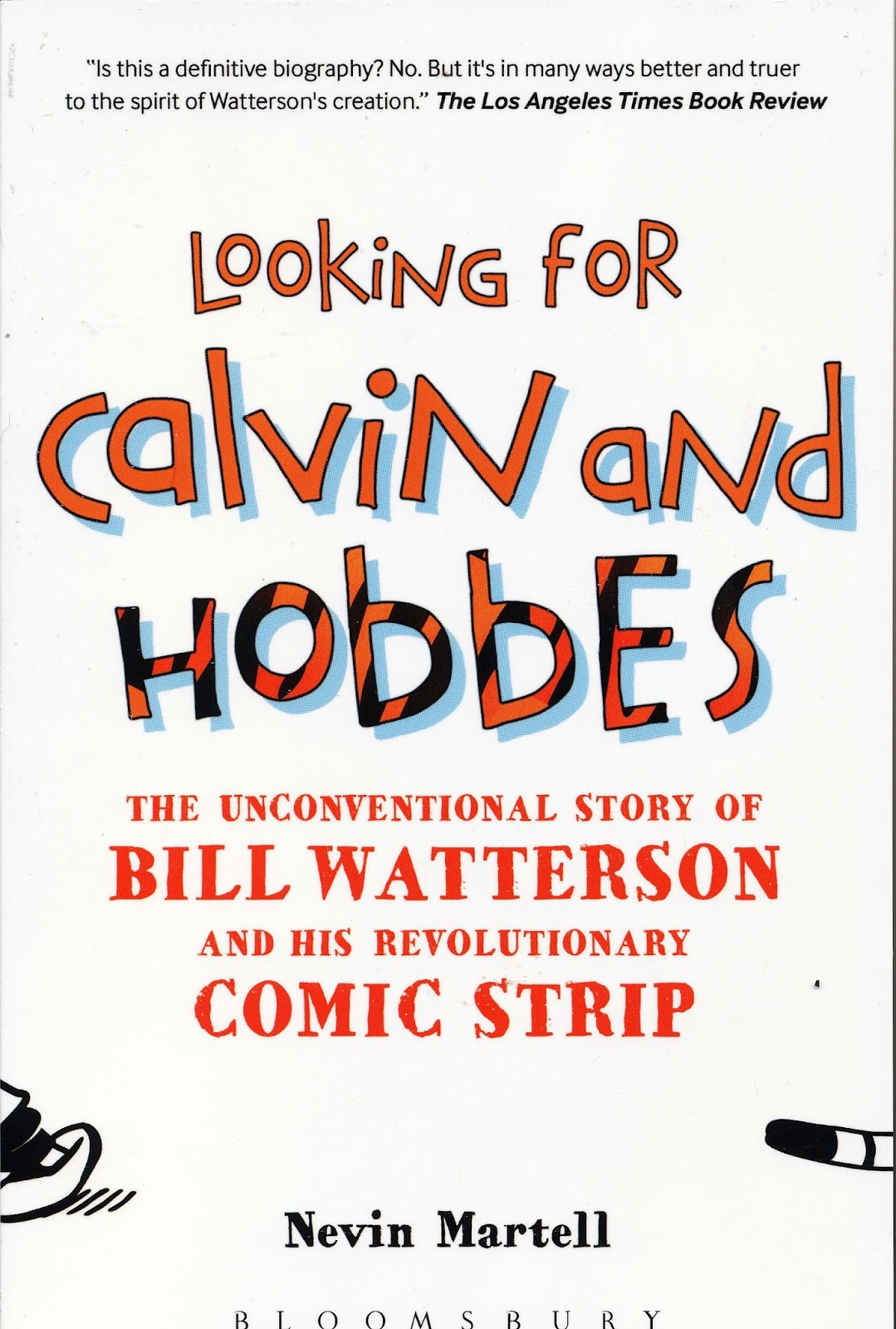 Except that when I started reading it I discovered that Nevil Martell, the author of the biography, had never met Watterson, never spoken to him - or even exchanged emails.  Not for lack of trying, but still...  And Watterson's family and friends respect his barriers and give only very limited information and interviews.

As a result, it is a biography with holes in it.  Information chasms.  I did learn that Calvin is entirely a feat of imagination.  There is no tear-away terror in Watterson's life who inspired Calvin's creation, and the man himself was a well behaved child rather than a rebellious non-achiever.

I also learnt that the absence of Calvin and Hobbes memorabilia and spin-off products is deliberate.  Watterson refused to licence products, and with the exception of a couple of calendars (which Watterson drew the images for) the books and the cartoons are all there is.  Which I respect, while hypocritically admitting that I would happily drink from a mug with either Calvin or Hobbes on it.

There was one element of the book which floored me though.  Martell seemed to think it was a big issue - and it had never occurred to me.  His question was:  Is Hobbes a tiger, or (his words) a doll?

Of course Hobbes is a tiger.  A ferocious tiger.  Some days an attack tiger, other days a big pussy cat.  Who happened to be Calvin's very best friend, loved tuna, comic books and couldn't be trusted not to draw moustaches on the super-heroes.

Reluctantly I will also admit that Hobbes is also a stuffed toy.  I know which perception I prefer though.  I am very, very grateful that my mind is more flexible than my body and that it happily accepts two contradictory realities simultaneously.

I gather that Watterson has turned his considerable talents to painting.  I wish him well - and would love (when he is ready) to see some of his work.
Posted by Elephant's Child at 05:45